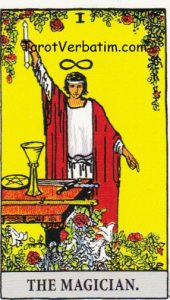 So few meanings hath Magician, that he is boring – you keep using the same old ones. Anchor card par excellence. Take male pronouns first and action words next, because Magician is ‘the male principle’ of action (as the ‘1’ of Major Arcanae – and see High Priestess as the female principle because she is the ‘2.’ First-person pronouns too: I, myself; he, himself, and once in a while ‘him’ or even ‘his.’ With or without his main verbs. Main verbs are: all forms of (conjugate them) do, make, create, bring about or bring down, initiate, and ‘start’ as a verb. And the word ‘action.’ Not to mention odd ones like ‘doer.’

So Magician can be: he, he does (or did, or has done, etc.); himself (or do it himself, or did it himself); myself (or did it myself, or all by myself), that man (what that man did, that man is the one who acted; was done by the man; what a man is doing); I (or I do, I did, I will do, I started, I took action, I initiated). That’s not meant to be a full list of how this works.

Is Magician In A Three Card Spread That You Need Help With?

Reading for yourself can be difficult, even when using Emily’s combinations. The subconscious does not always pick up on the symbols when our emotions are involved and we are not objective. A spread that keeps coming up over and over is certainly telling you something important. That’s why Emily developed SHORTCUT! for those times when you need a little help with your cards, but aren’t interested in a regular reading.

Receive your personal Tarot Verbatim interpretation from Emily on your self spread within 24 hours! Only $8.75

Clicking on the button will take you to PayPal.

I am a member of Tarot Verbatim and have learned a lot from you. I came across it in 2016 and a year later began working in the Psychic world. I taught myself Tarot mostly from using your site.

Learn One Card Lesson – A Full Exploration of Magician

Immersion into Magician.  Know it intimately, not just ‘what it means.’  Experience its emotional tone, its spectrum of meanings and how they relate to its picture, what themes it belongs to, the things it says – and the words it says with certain other deckmates.  Experience all this in such a way you know where Magician fits into the Tarot story you are following.  You have ‘reached out and touched’ Magician.  Enough of this, and you are on your way to becoming an expert.  It all fits into how you are reading right now, and grows with you. This Tarot training is not you memorizing each of the 78 cards; it’s you getting the knack of being conscious of each illustration as it connects to other cards’ illustrations. That prompts your insight and gives you the knack of sensing (from the subconscious) what that set of cards is talking to you about.

Two Card Phrases Created by Magician And Other Cards

Although you’ll find a plethora of Two Card Phrases which include Magician above, knowing which phrase applies can be tricky. You may find the additional info you need within our archives. Links to those are listed here: