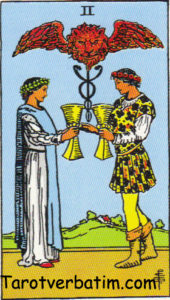 Two of Cups represents one’s grand passion for another, represents the love bond, the irresistible attraction, between two people. The fact that Two of Cups appears, and not one of the many other cards about love, affection, or passion may also indicate that ‘there’s something else to the story.’ Two of Cups doesn’t team up with cards that mean harm very often, but when it does … look out! This is a list of pairs of cards that seldom pair up, so we have this collusion-corruption-causing- harm themes. Now watch as Two of Cups corrupts a larger group with its self-interests.