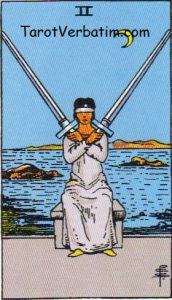 Two of Swords has one simple job: To say ‘no’ and ‘not’ and ‘don’t’ and ‘don’t be’ and other frank negatives like those that cancel out the meaning of a neighboring card, especially one Two of Swords is paired with. She knows a few other words, not many – words like ‘closed’ and ‘end’ and ‘stop’ and ‘dead end’ and even ‘The buck stops here.’

This is one of the negative modifiers, a key concept in Tarot Verbatim which has the amazing ability to identify something that won’t actually happen.

Since their main job is to cancel out another card, the lists for negative modifier cards – called ‘negators’ in Tarot Verbatim – tend to be simpler and clearer.